So far, we were using a policy template created by Aserto. Now let's see how we can make changes to a policy and see how these changes make their way to the Aserto Authorizer.

Let's say our product manager has asked us to allow managers to be able to change their reports' title and department. You may naturally think that such a change would require a code change in our application. But with Aserto we can do this by modifying our policy and without making any changes to our application code! This is the power of the "Policy-as-Code" approach: it decouples the authorization logic from the application logic. 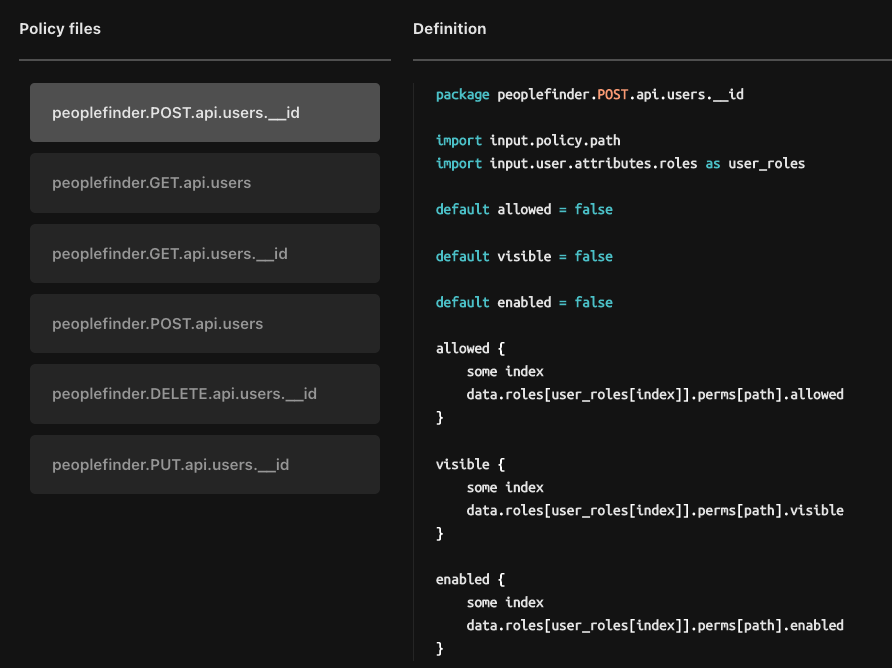 As mentioned before, the naming convention for packages is policyroot.METHOD.route. So in this case,

This module controls access to the “Update” button at the bottom of a User card, and defines the policy that authorizes users to make changes to department and title properties.

In the Images tab, open the peoplefinder repository:

This will open a new browser window: 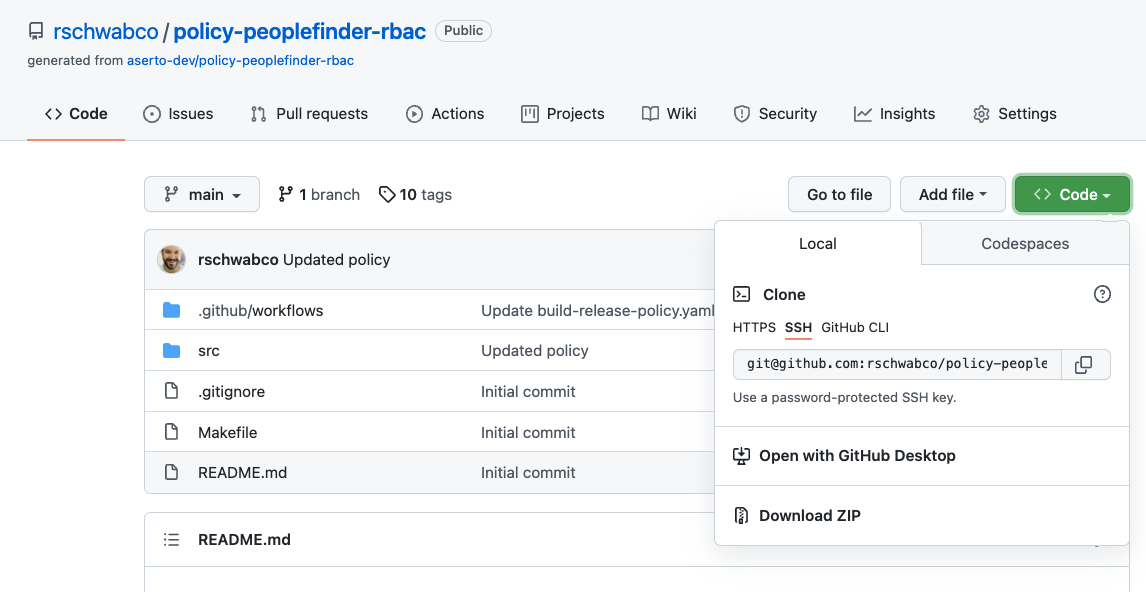 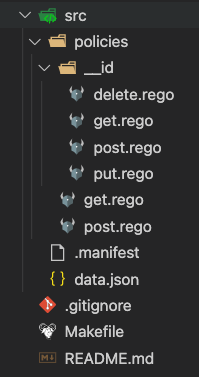 The naming of the directories here is only a convention to make it easier to understand the structure of the policies, but all .rego will be loaded into the authorizer regardless of the folder structure.

To implement the logic of allowing managers to update their reports' title and department, we need two pieces of information: the user id for the user shown in the user card, and the id for the currently logged in user. In PeopleFinder, we send the selected user's id as part of the resource context in addition to the logged in user identity. Let's add a rule that will leverage this and allow a manager in Acmecorp to update their reports' details.

Open the file src/policies/__id/post.rego, and add the following rule to the policy:

The expression dir.is_manager_of is part of a set of built-in Rego functions Aserto provides (you can find the full list of built-in functions here). In this case, it checks the attribute manager of the selected user passed as part of the resource context (input.resource.id) and determines whether it is equal to the user.id of the logged in user.

We also need the "Update" button to be enabled for managers, so we'll add the following rule to the policy:

This rule means that if the enabled decision will follow whatever the allowed decision is. That means that if any of the allowed clauses evaluate to true, then the enabled decision will also be true. Specifically, if the clause we added using the is_manager_of built-in evaluates to true, then the "Update" button will be enabled - regardless of the decisions made by rules based on the logged in user's role.

So now the Update operation is allowed if they have the role of an admin or an editor, OR if the logged in user is the manager of the employee that they are trying to update.

To have the policy updated in Aserto, all we have to do is to commit our changes, tag a release and push it to Github. Aserto's CI/CD pipeline will automatically create a new policy bundle and make it available to the policy instance. 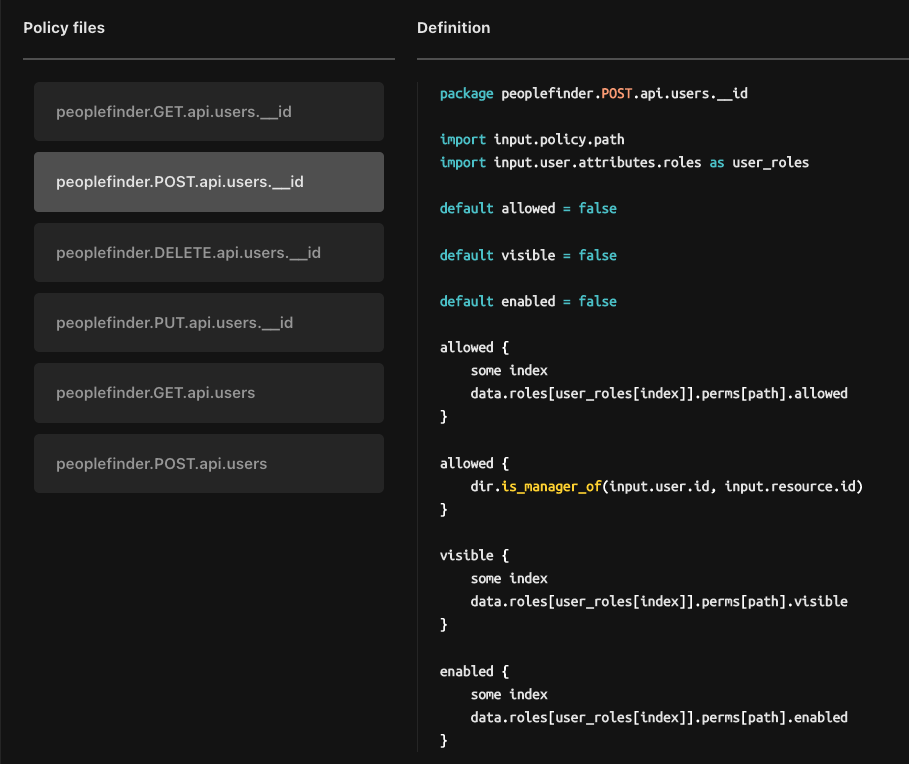 Since we set the selected tag for this policy instance to latest, Aserto will automatically update the it with the changes made to policy.

Review the behavior in the application​

When you see the new policy has been updated in the policy instance, go back to PeopleFinder, and switch context to April Stewart from the top-right user context menu. This will simulate a logout of Euan and a login of his manager, April. Now the Update button is enabled, and April (as Euan's manager) should be able to update Euan's title. 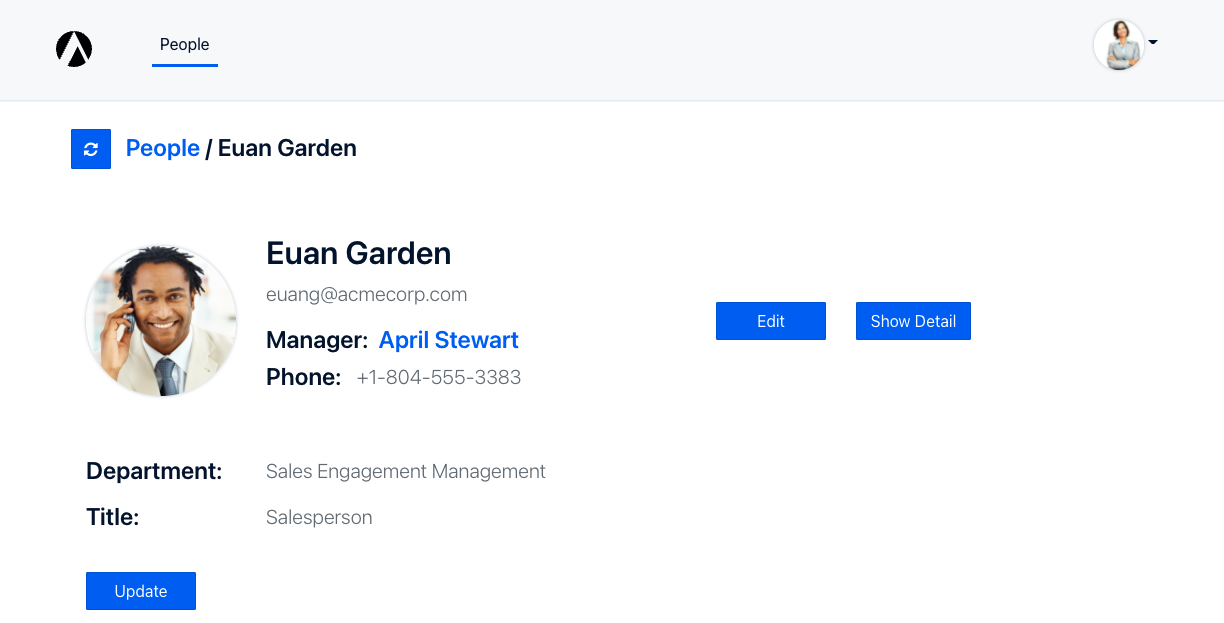 Success! You've completed the getting started tutorial, and should now be able to create and update your own policies and use them in your application. In the next section we'll explore Attribute Based Access Control (ABAC) which allows us to define a more fine-grained and dynamic authorization model.

You can also learn about how to use the Aserto OneBox to set up a local development environment.