Now that we have PeopleFinder up and running against our policy, we'll make a policy change and see it reflected in PeopleFinder.

To start, note that for any user that is not in the "Operations" department, the "Update" button is visible, but disabled. This includes the hero of our story, Euan.

The Aserto console shows the current loaded policy for the hosted Authorizer instance for your tenant. If you click the peoplefinder policy in the Policies tab, you will see the current set of policy modules.

The modules are named using the Rego package directive, and follow the convention policyroot.METHOD.route.

Let's look at the peoplefinder.POST.api.users.__id module. In this case,

Click the peoplefinder.POST.api.users.__id policy file. This package controls access to the “Update” button at the bottom of a User card, and defines the policy that authorizes users to make changes to department and title attributes. 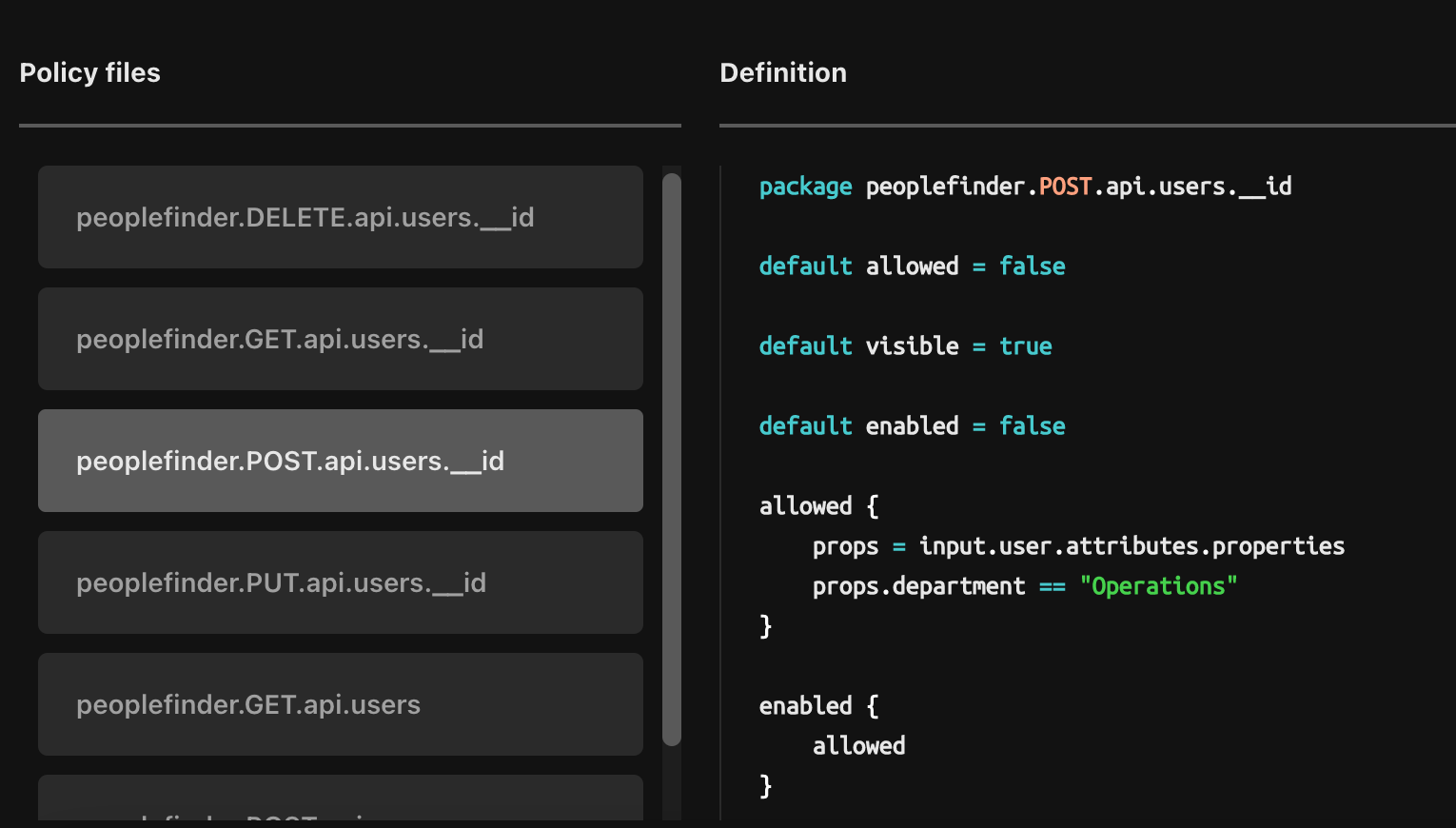 This policy exports three values - allowed, visible, and enabled. allowed is the decision that governs whether an operation is allowed at the API. visible and enabled are used by the React app to determine how to render the UI element associated with this operation (in this case, the Update button).

The policy only allows the Update (POST) operation if the logged-in user has a department attribute that is equal to Operations - meaning, only users in the IT operations group can change titles or departments for other users.

The Update button is visible to anyone, but only enabled for users who are allowed to perform the operation.

The policy modules are organized by HTTP method and path. E.g. the post.rego file in the src/policies/__id directory has a package named peoplefinder.POST.api.users.__id.

Let’s make a change that will allow managers to update the department and title of their employees.

As we mentioned, the policy defined above only allows users in the “Operations” department to Update the extended user attributes, and only enables the button if the action is allowed.

If you change the line defining the enabled decision to default to true instead of false, the Update button will be enabled for all users.

If you then add the following allowed clause to the file (after the first allowed clause), the policy will allow the operation if the logged-in user is the manager of the user they are trying to Update.

The dir.is_manager_of function is part of a set of built-in Rego functions that Aserto provides.

Now commit the changes, and create and push a new tag, so that the Aserto CI/CD workflow for policy changes kicks in, creates a new policy bundle based on the new tag, and makes it available to the authorizer:

Check back to the console and ensure that the new policy is reflected in the Policy browser.

When you see the new policy has been loaded by the authorizer, go back to PeopleFinder, and switch context to April Stewart from the top-right user context menu. This will simulate a logout of Euan and a login of his manager, April. Now the Update button is enabled, and April (as Euan's manager) should be able to update Euan's title.

If you change cards (for example, to April's own card), and try to update her title or department, you'll see the error caused by the policy denying the operation, since April is not her own manager.

Next, we'll learn how to install the Onebox for local development.